The Daily Table, an affordable health food market looking to change things in Boston and beyond

The Daily Table, an affordable health food market looking to change things in Boston and beyond

by Brad Hines 2-28-16, 9:35 am, this story first appeared up at: http://bradfordhines.com/affordable-health-food-market/

In the heart of Dorchester Massachusetts, an urban neighborhood of Boston, a new food market has opened up, with a non-profit status mission to make low-cost family grocery shopping available for all, but especially those of lower income. I recently visited multiple times.

The staff working the evening shift in the tiny Dorchester outlet seemed to have an upbeat air about them, as if they know they are part of a movement. Everyone was friendly, but it was the prices of the foods that was truly the most impressive, as well as the story behind them.

The no-frills boutique–which has plans for expansion–has a goal to offer up healthy foods that are at reasonable prices. They aim to open a second outlet in Boston, and perhaps in other cities at a future date. There is little unhealthy anything to be had in the entire store even if you want it. Certainly not in the deep fried, powdery processed cheese, squishy white bread, white sugar laden jugs of syrupy soda kind of way. What I saw instead was food to borrow the connotation from the recent documentary In Defense of Food, “food” as in, things from the earth, things that are whole and unmolested, with little branding behind them, some of which are made in house, and less steps from the earth to dinner plate.

So it is throughout the store, The Daily Table imbues a pragmatic mission statement, and a badge of honor by proudly offering up some sometimes not-so-perfect foods. One bin of the beta-carotene rich sweet potato now recognized as a healthier alternative to russet potato fries for example, has a look about them unabashedly that they come from the ground, built-in to the astoundingly affordable price of $.59 a pound. At another brand of health food store, you might picture, they’d perhaps be cleaner, beset with more variety, and atop a fancy display setup. Nowhere in the store here was the pretense and pomp you may expect from a “health” or “whole” food market, and the associated out-of-pocket costs from the shopper. Instead, many of the foods Daily Table serves up, are overstock and soon to be past due foods from other food manufacturers and growers with excess product.

Founder of The Daily Table Doug Rauch, explains to me where such food is sourced from, and stresses as well, the unfortunate reality of people not understanding sell-by dates and what they actually mean. “The Dating Game, a Harvard study says that code dates are unrelated to food safety, they are about peak flavor.” He continues,
“Instead of fighting an uphill battle trying to educate people about this, we purchase overstock from sources who have beautiful product, with too little shelf life for them to bother to ship it across the country perhaps, or when they have simply purchased too much. We then put in the store for what is often its last few days, but it is usually beautiful.”

There is a real transparency to where the food is coming from at The Daily Table, even literally so, as I snuck a peek in the window of the very kitchen that prepares the ready to go meals, like the carrot soup I purchased. 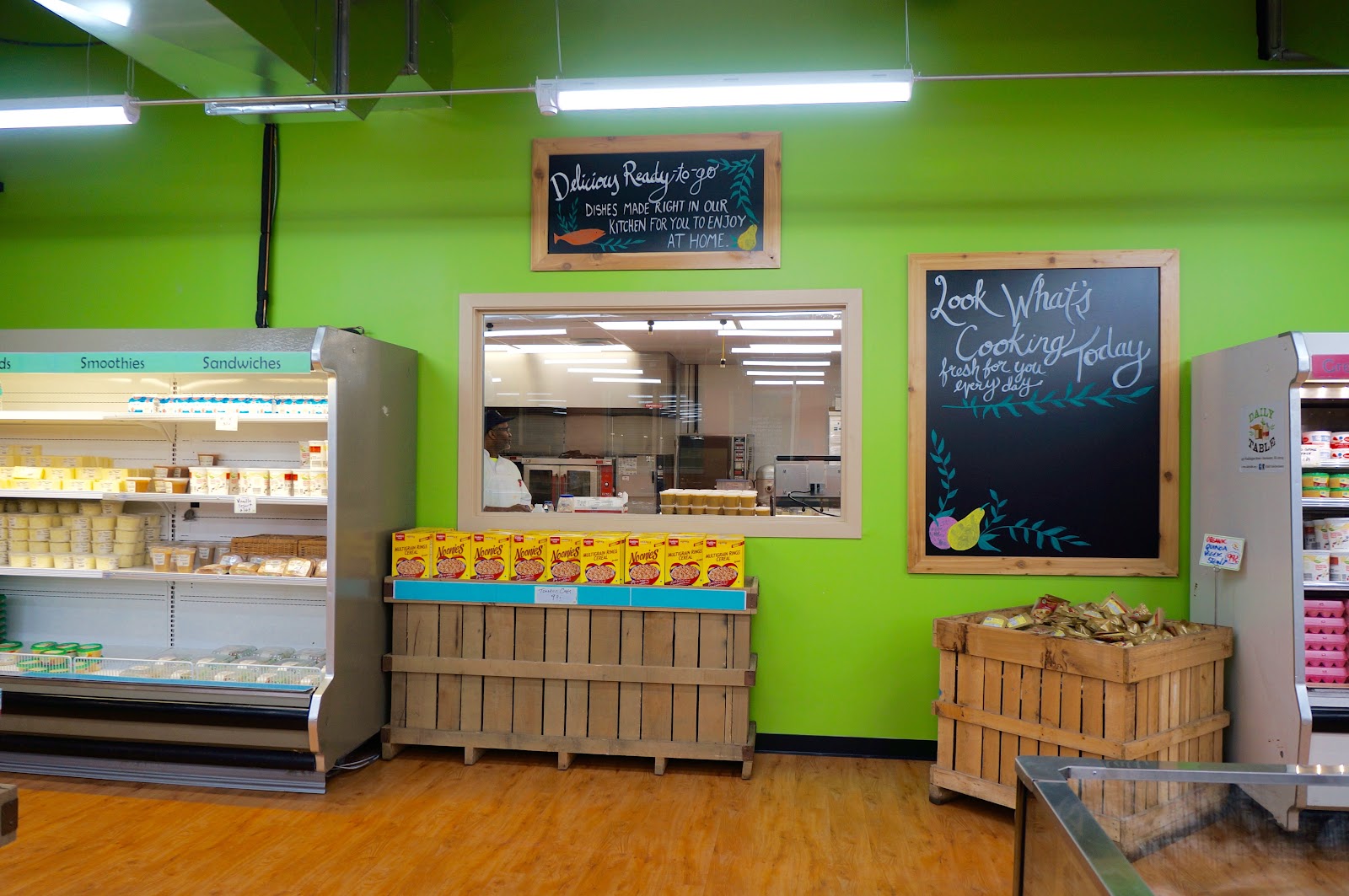 As I peruse the wide open store layout it feels akin to its Trader Joe predecessor’s ethos of fewer items (Rauch is former president of Trader Joe’s). Noticeably absent from the meticulously curated shelves are many perhaps more luxury-esque foods, the more non-essentials; think coffees, liquor, beer, cheese and smoked meat assortments to name a few. Seemingly for a long time, “health” food has been conflated with “speciality”, as in rare, as in expensive. This is a hallowed ground and no man’s land that has long punished lower income families. The Daily Table seems to modestly do the opposite, for example I notice that the labeled “chocolate covered raisins” in a tub that they sell are actually organic, dark chocolate covered raisins, almost as if, to downplay a health aspect to it, or at least, to not scare anyone off. Similarly, a $1.69 fresh made honey-dew melon smoothie with three listed active enzyme cultutres starkly mentioned only in the ingredients, was simply called “melon smoothie” on the front label. Such a drink would easily be $4 elsewhere.

Economic geography too, has often dictated that the proximity to health stores is in pricier zip codes, leaving poorer families and individuals–whom also may have no car–unable to realistically reach certain stores that do offer either bargains, healthy foods, or both. 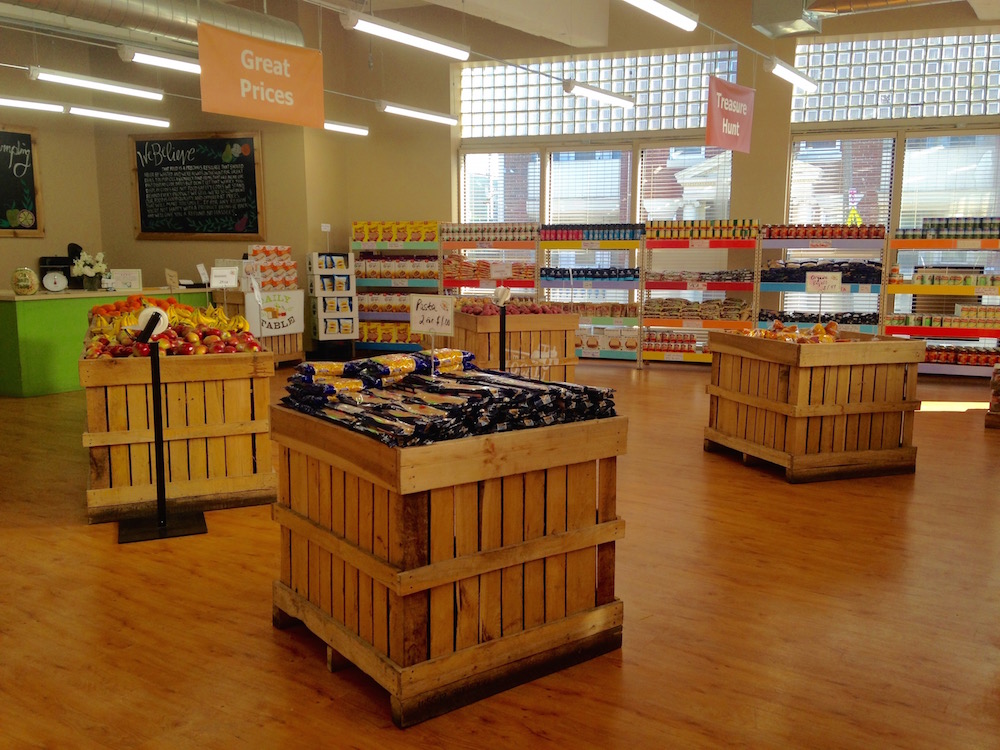 Despite not having even orange juice for sale (too much sugar in it) it isn’t to say The Daily Table has nothing “fun” to buy within, on the contrary–hardly pedestrian “Curry coconut chips” were part of my first purchase. Historically, eating healthy has not necessarily had to be expensive, but often is very no frills foods like lentils, tap water, and basic produce, certainly not of which would be organic. The Daily Table has made attempts to change this, and while you need to join a membership to shop there, the membership is actually free and involving little more than giving your basic information to help record economic data to support the non-profit status of the company. At the time of this writing, the store seems to be well situated in the city, as 91% of patrons to the daily table are in fact from lower income earning zip codes. 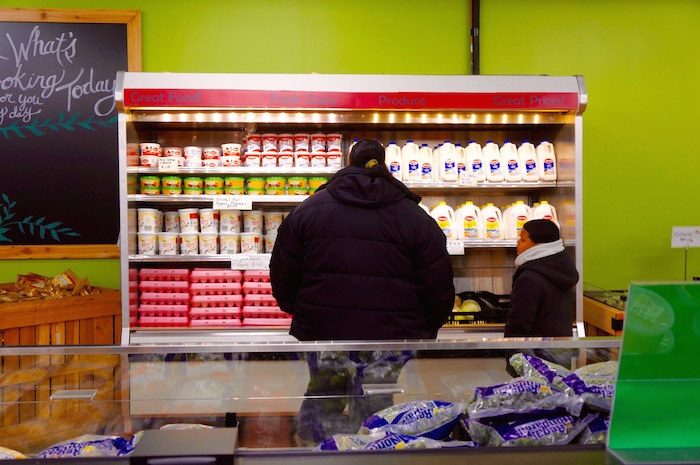 While my own shopping cart, shown below was indulging myself in goodies that I happened to fancy at the moment (the chocolate covered raisins for one), be assured that consumer staples like milk, bread, and eggs were very affordable, a dozen extra large eggs are $1.99 at the time of this writing for example.  A store employee agrees with me as I exclaim that $0.79 for a box of cereal isn’t even that cheap at The Dollar Tree, nor that big in size, where it typically cost, you guessed it, a dollar; and for a much sugary box.

Obesity and hunger, two sides of the same coin.

To this point, as Rauch summarizes to me, “The problem in America is not affordability of food… obesity is the face of hunger in America. The challenge instead is asking how do we get affordable nutrition? That’s what The Daily Table’s all about.” He goes on, “The food system, from the Farm Bill on up, is designed, to have calories be cheap, and nutrients be expensive”. 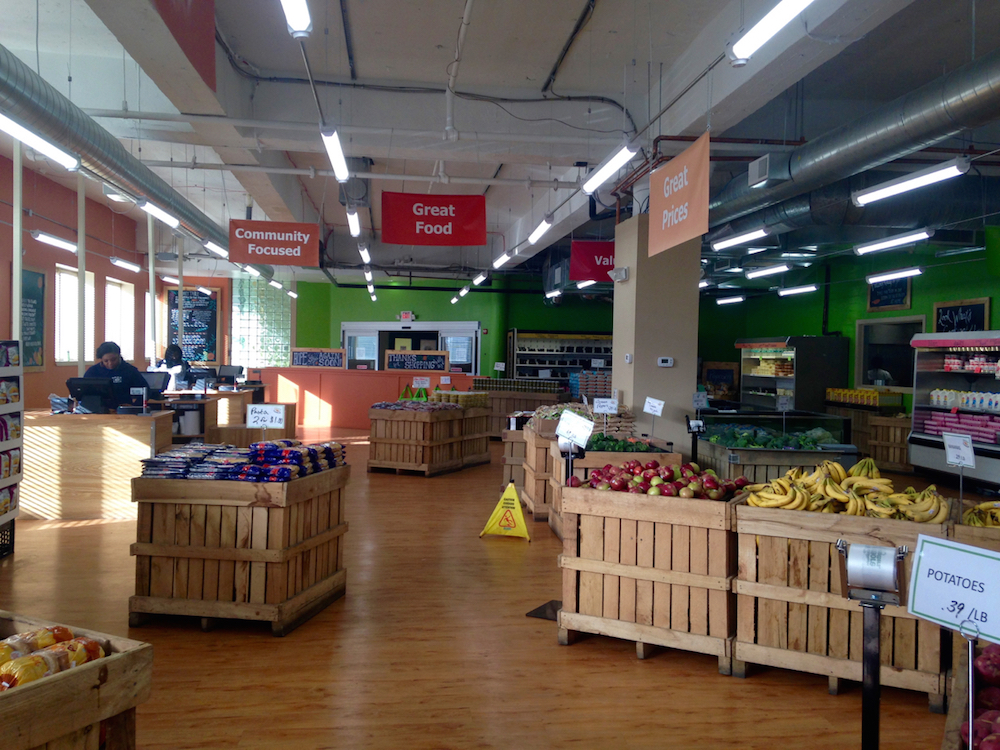 So it is perhaps, that many have come to equate “health” food markets with high price, hence the origin of Whole Foods’ nasty nickname of “Whole Paycheck”. This is perhaps evident in an unscientific poll I conducted amongst social media friends and family, where they were typically guessing from this photo below that my shopping cart cost me $13-26, or at least that it would cost as such in most other stores, they didn’t know where I had shopped after all so as not to bias the question, I simply listed the items instead. The total price was in fact $6.27. 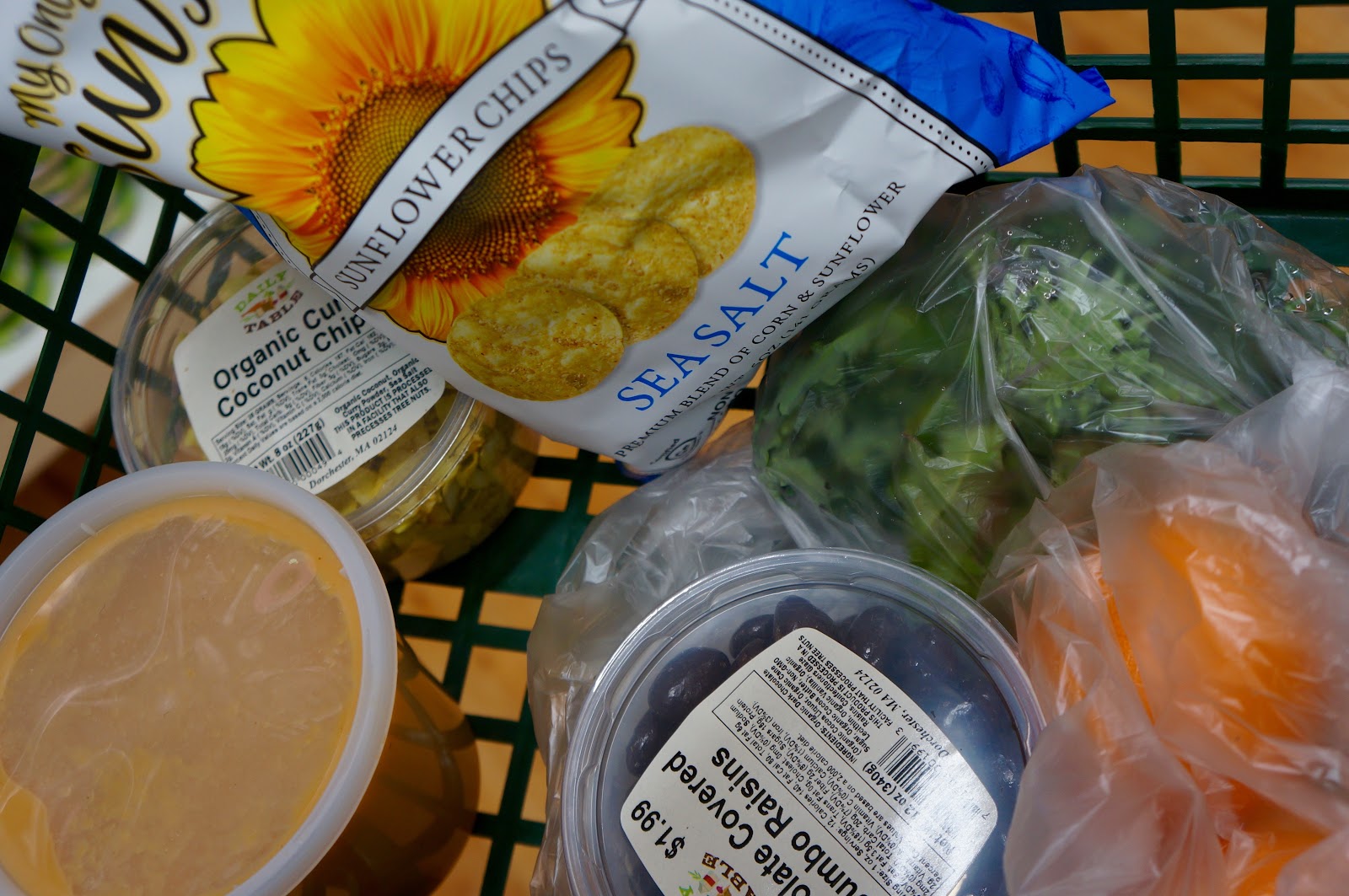 As I write this, I have thrown together a tiny meal of kale, tortilla chips and carrot soup to help me think, the kind of brain fuel eating that could range from work-break munchies, to a child’s after school snack. It took nothing more than putting food on a plate, and heating up their already in-house made Spicy carrot ginger soup. It indeed tastes good, but more exciting perhaps is the premise that it is about $0.30-$.40 of food.

Plans for epansion of the chain are tenative, possibly another outlet will appear in Boston in the next year or so, and from the potential success of the existing stores, the brand my expand to low income areas of other cities, think Chicago, New York, Detroit, etc.

The impact it has been making here in Boston is already evident. The cashier who rang me up shared an anecdote, of a recent patron who had come in. This shopper I was informed about, apparently had $10 with her to spend, she got together an entire typical-for-her bag of groceries; shortly after being rung up for only $7 and being left with unexpected change, she broke down crying of relief right there at the checkout. While I have no idea what items she bought, there was definitely no two liter jug of sugary soda or neon-orange colored cheese anything, you’d have to go to another store for that.

New non-profit food store in Dorchester founded by former Trader Joe’s is first of a hopeful chain store to pound out steep discounts on healthy food to serve up nutrition to lower income urban areas.

Please help us spread our message by sharing: